We left early from Takayama to catch the morning bus to Ogimachi village in Shirakawa-Go. This was the 2nd time I went to the beautiful village, 1st time being last year in summer.
Bus departed from TakayamaHida Bus Center, next to JR Takayama station, schedule can be found on this website.

Whilst in summer this village was bustling with color and green fields, it was completely white in winter. Pity when we were there, there was actually not too much snow. *sigh* 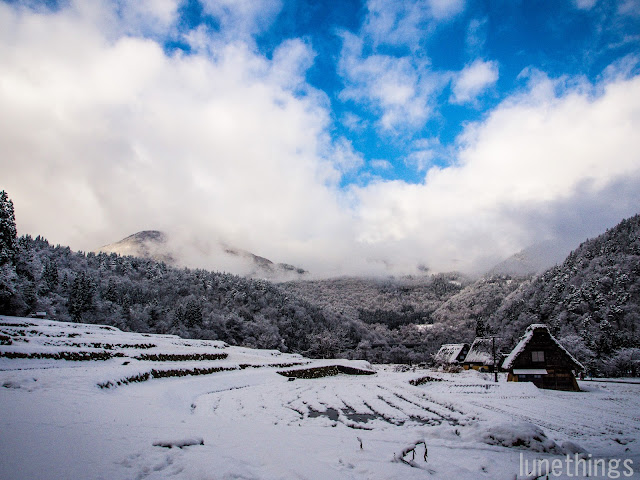 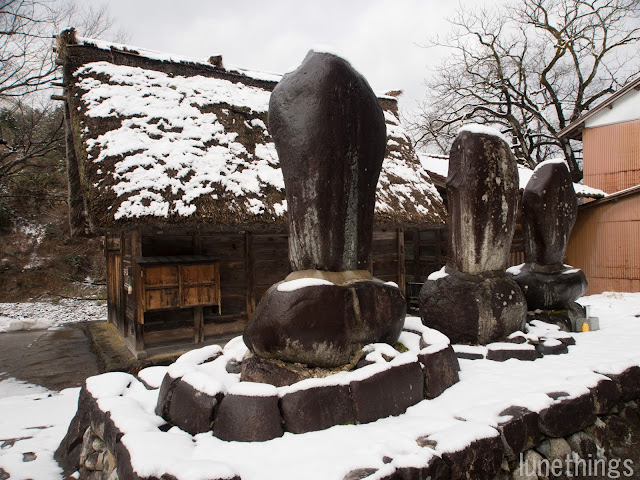 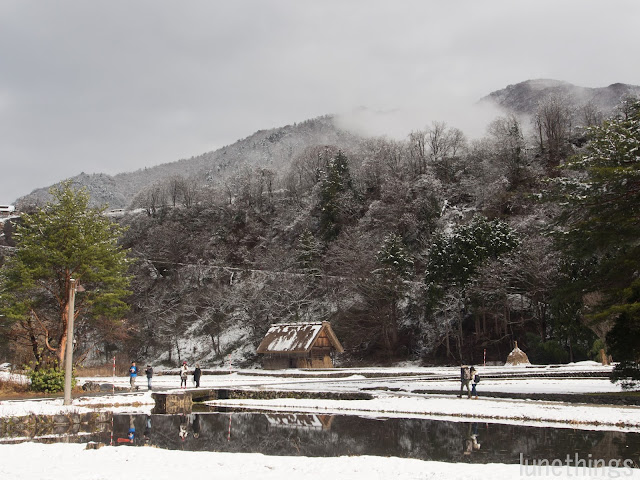 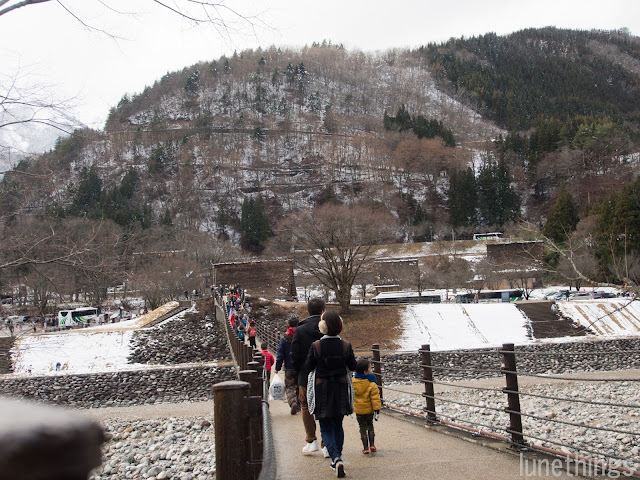 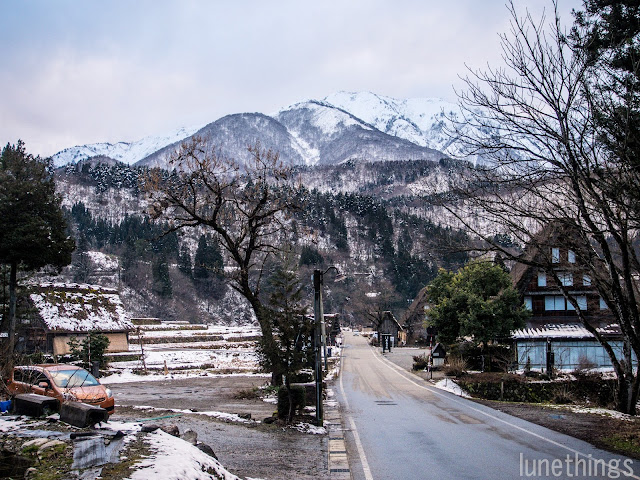 Not forgetting about snacks of course... .

***
We had lunch at Shiraogi, which serves some set meals. Of course how could I pass on some of my last chances eating Hida beef! 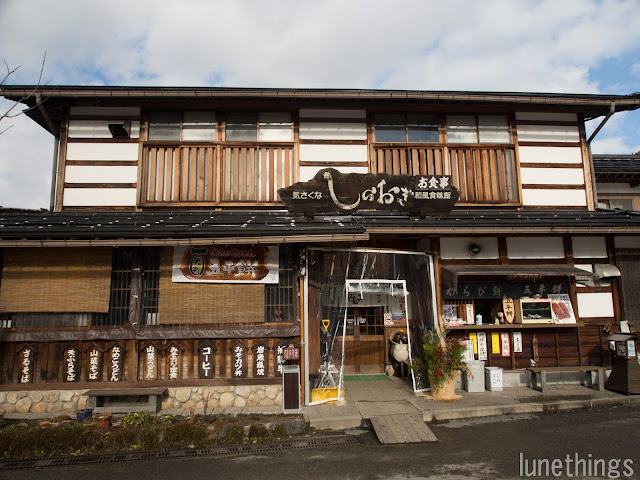 Hida Beef Set (JPY2250) and Pork Cutlet (JPY 1000).
Both were great. I think it is pretty standard quality for the restaurants in the village as we have sampled a different restaurant last year during summer and I couldn't decide which one was more superior. 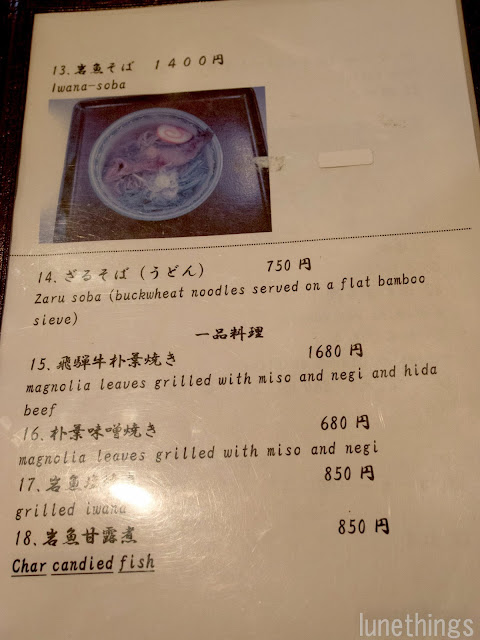 
We went to the lookout to catch the standard bird eye view picture of the village. 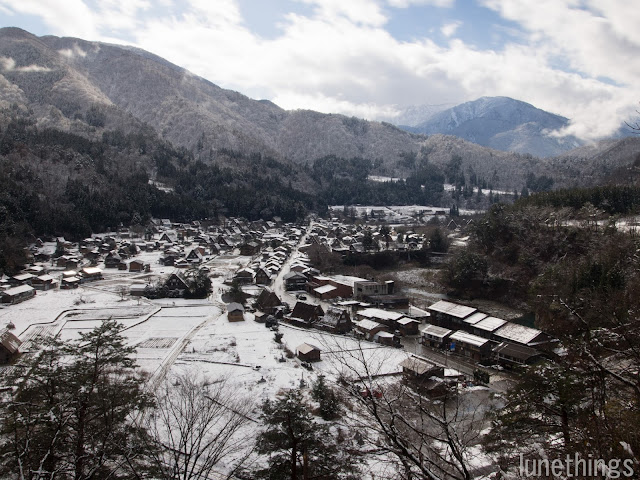 Although there was not too much snow enveloping the village, we still managed to play around with what we had :) 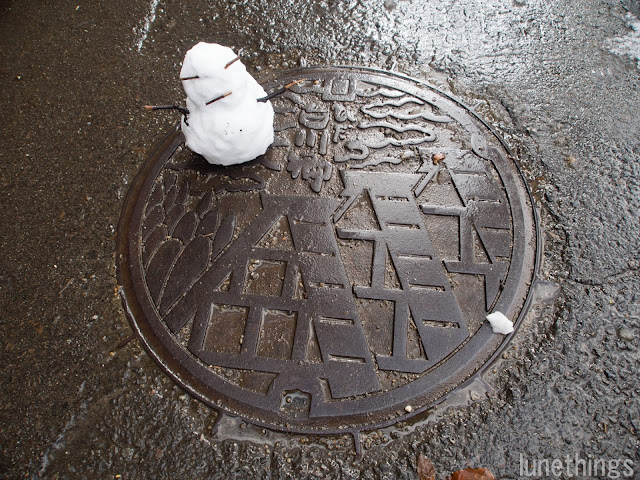 This village has a different charm in winter than what it is in summer. I really want to go back here during autumn (when maple trees thrives) and spring (when the Sakura blooms). And perhaps in winter as well since I definitely hadn't had my snow craving fixed with the meager snow we had when we were there.

We also visited the outdoor museum as we received some discount vouchers from our host at Shimizu (where we stayed for the night). But as 1/2heart and I had been there as well in summer, we ended up having snowball fights inside with our friend... .

Anyhoo, more pictures of the lovely village in winter... . 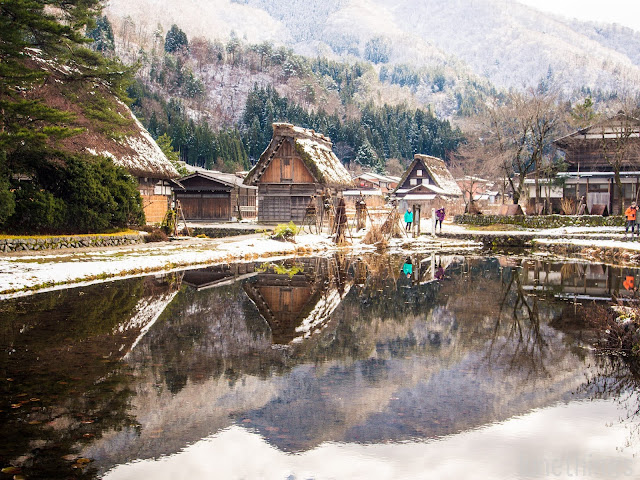 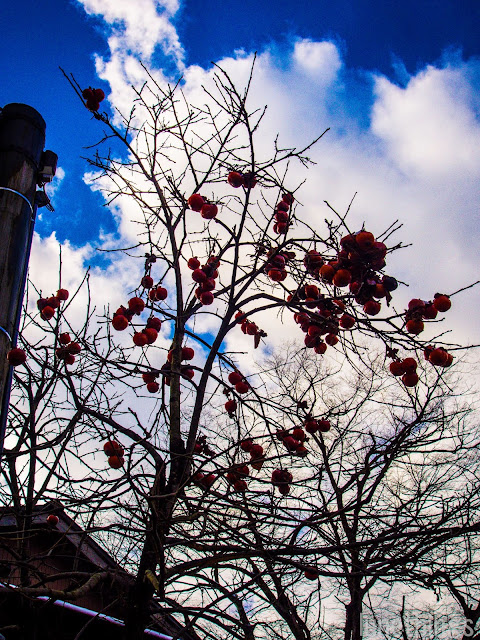 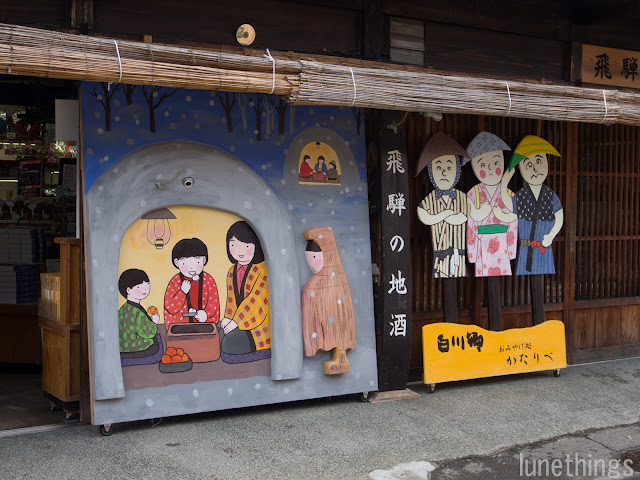 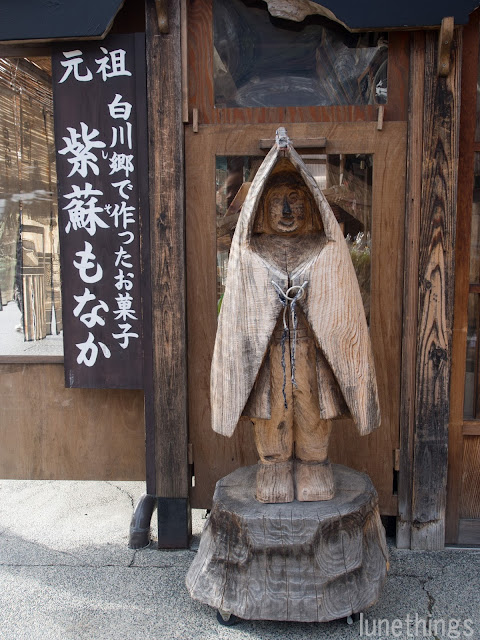 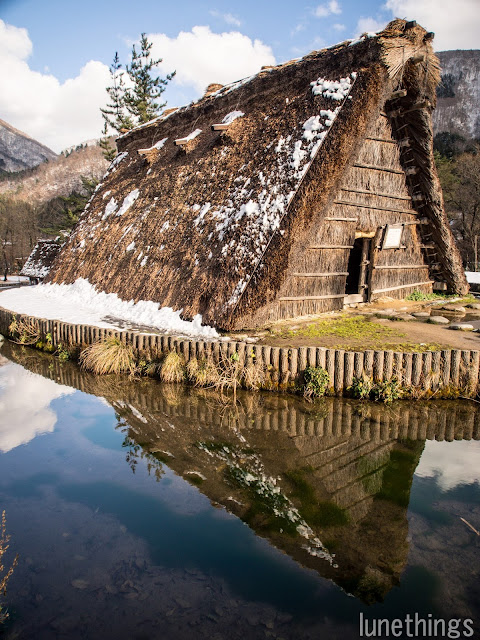 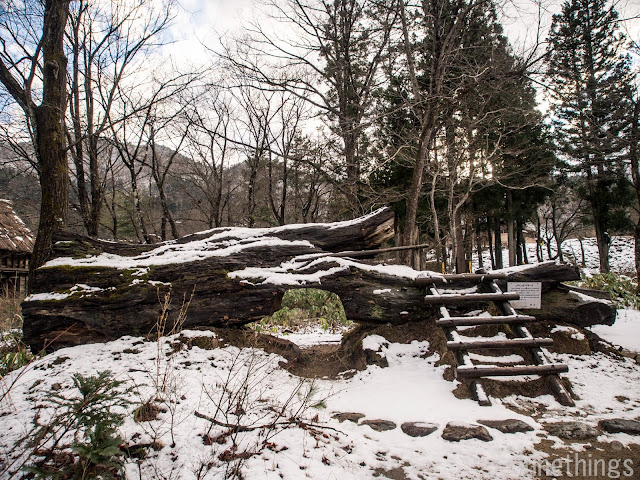 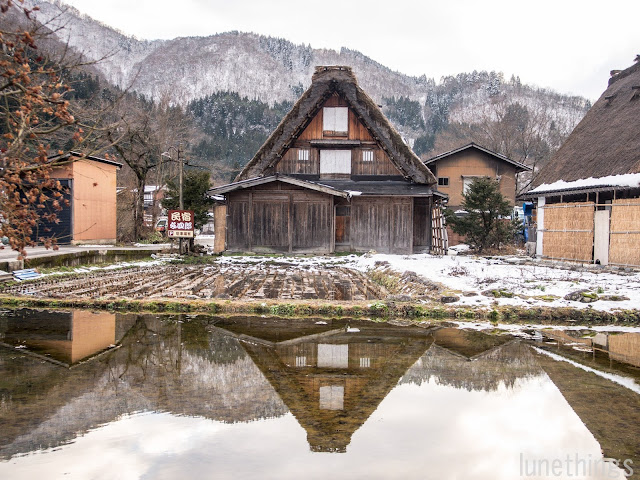 For our stay at Shirakawa-Go, we stayed at Shimizu Ryokan, booked through Japanese Guest Houses. Fare was JPY9900 per person, inclusive of dinner and breakfast. There really was nothing to do after the village 'closes' at around 5 or so (when all the shops practically closes), but it's recommended to stay in the village to unwind.

Shimizu was the only place not fully booked when I tried to make a reservation back on October T.T It was located a bit further from the other clusters of thatched houses, still no less charming though. 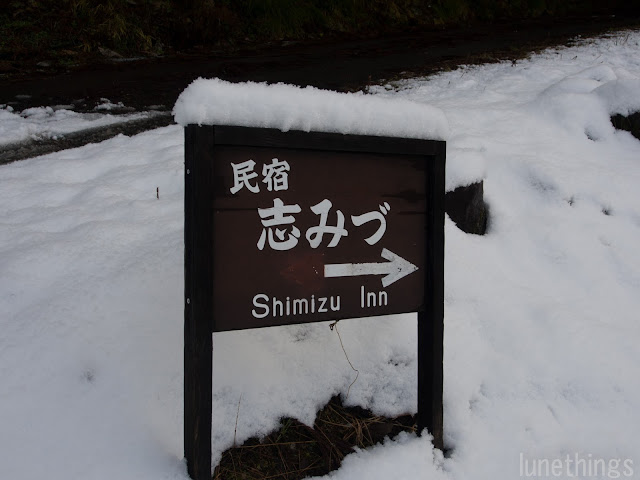 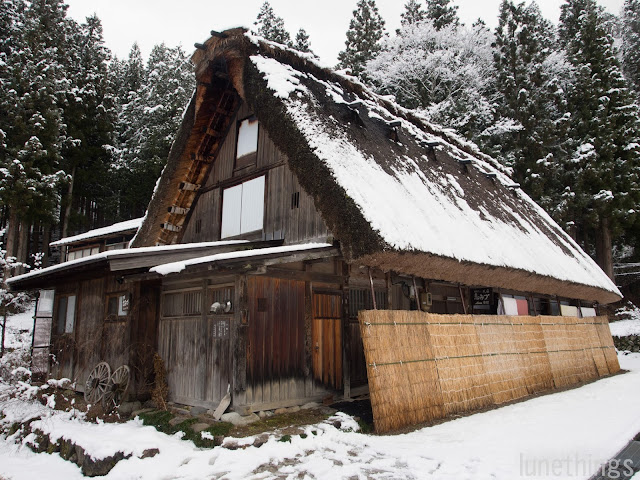 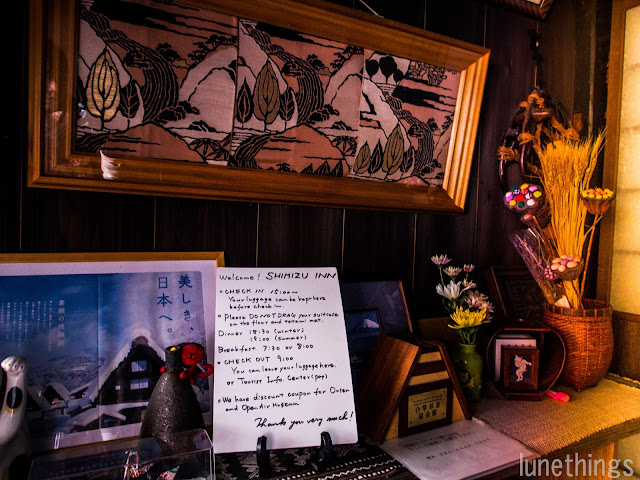 Room was spacious for the three of us. The hosts did not really mingle with their guests (pretty non-existent conversations). Last summer, the hosts in Nodaniya - where we stayed in Ogimachi -, and the hosts at Yomoshiro - where we stayed in Ainokura, were quite bubbly (or at least attempted to, despite language barrier) and mingled with us.

We had our dinner in almost silence while trying to make silent jokes to each other:D

Meal was home-made tasty and we had a very good night sleep.

It has been about 3 weeks since I left wonderful Japan and went straight into the hustles of work T.T
Blog had to be abandoned for a while until today. So time to try to continue what's been left off...

Takayama is home to a number of sake breweries, mostly can be found along the old streets.

The day was crisp and cold, so what was the perfect thing to do? Sample as much sake as we could! 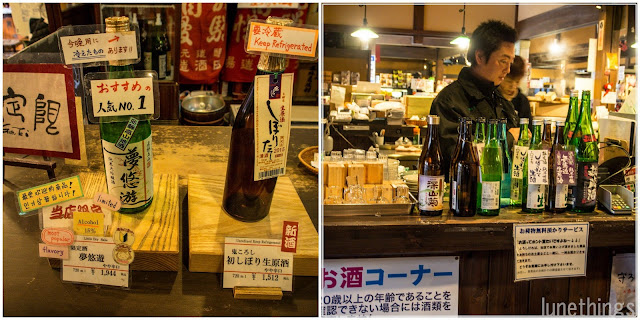 And then we entered this one shop and asked if we could sample their sake. The lady told us if we wanted to sample it free-of-charge, we could only sample one sake. However she proposed us to purchase their ceramic sake cup for 200 yen then we were allowed to sample all their sake on display (and we get to keep the cups.)

We did what any sane-sake-loving adult would do: paid 600 yen (for the 3 of us) and practically stood in front of their refrigerator for the next 2 hours sampling each and every bottle on display. 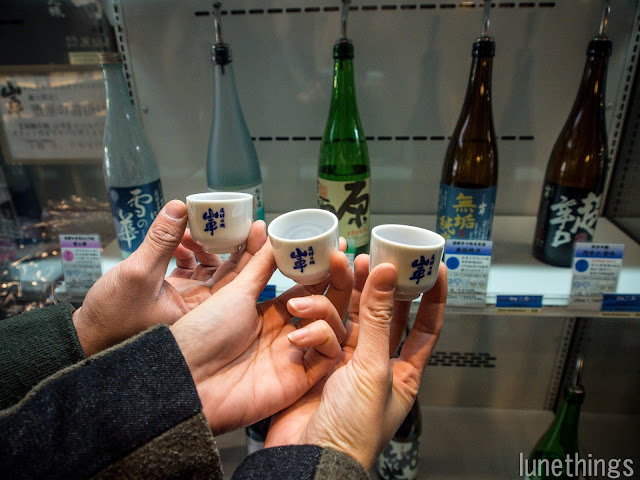 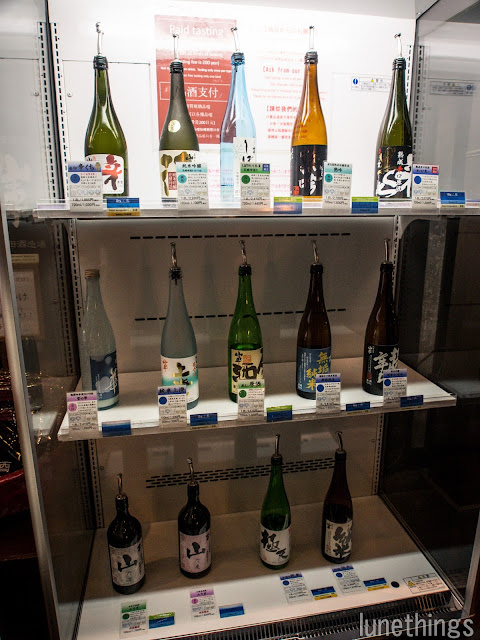 Life's good, y'all (btw, our favourite was the top right bottle, which we also purchased to be consumed later on that night... :D)

Takayama is a beautiful little town to spend leisure time and relax. With lots of hidden small eateries, you could easily skip your main meals and just fill yourself in with filling snacks :)
We went to Fukutaro (福太郎) for some light snacks. Their gohei mochi is sooo good. 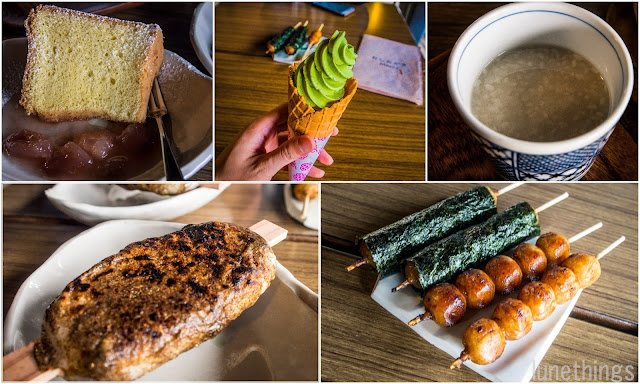 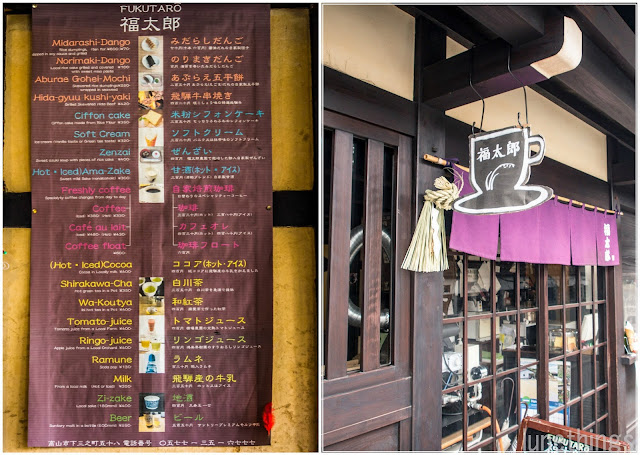 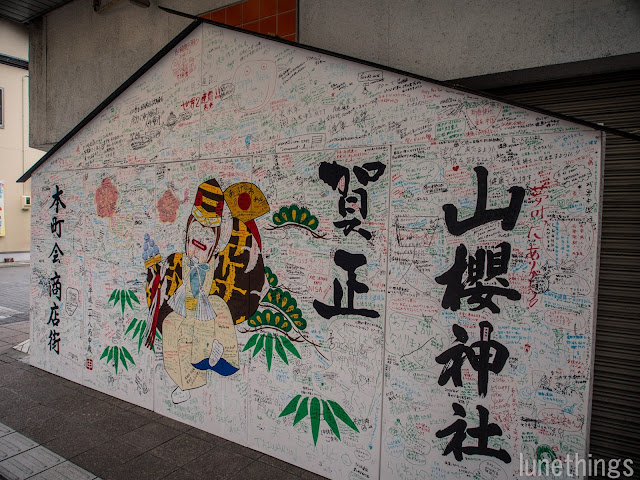 And at night we ate with our AirBnB host - Hiroto-san - to one of the small eateries which I wouldn't have known if he didn't show us. I also forgot to note the name *kicks self*

Tofu Steak, Keechan (a bit of like chicken stew hotpot), Kebab, and Tempura (and a few bottle of sake which I didn't post picture of :)) 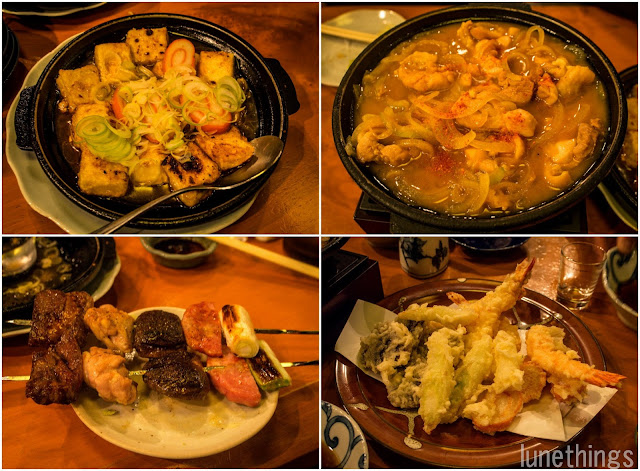 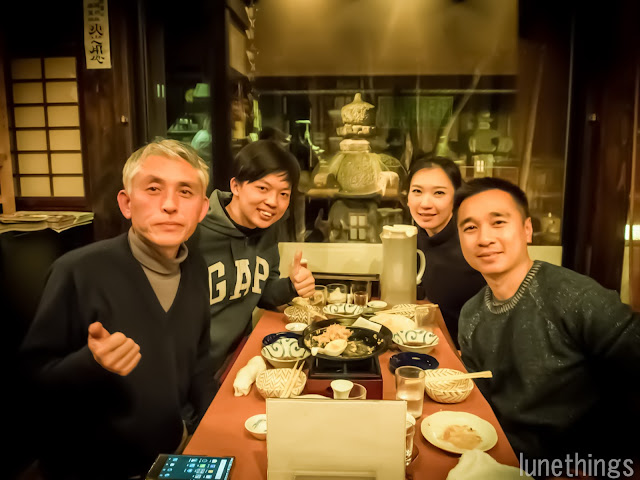 The next day we went to Shirakawa-Go and it's pretty picture loaded, so I'll make a separate blogpost for it.
Posted by lunethings at 16:09 No comments: