We went to Dan's again last weekend, and noticed that this place is now under different owner/management? The menu is now under 'New Shanghai something or rather (couldn't recall the full name)'. We went there especially for the duck, however there is no duck on the new glossy menu. We asked the waitress, and she simply said the duck chef is not in.

We did end up ordering some new dishes from the menu, but all of them are forgettable, bland, and definitely not worth the price.

Not going to go back again.

Went to a relatively new tacky trendy Chinese restaurant in Sydney, Dan's House over the weekend to try their acclaimed Peking Duck. After all, it has been more than 6 months since we gorged ourselves to Peking Duck and Goose feast (during our holiday in Hong Kong last December), and it was time to put more duck in us.

Dan's House is located in George Street, Sydney CBD, hardly a block away from World Square. You have to board the lift to reach the dining area (the upper floor is for VIP/private function, and the bottom floor is for regular dining).
Enetring the premise, I could see that Dan's House tries so hard to present themselves as funky and trendy restaurant, but woe is me, I am not a fan of the much blingness and all the gold details.

But nevertheless, it's all about the food right?


Deep Fried Tofu with Thousand Year Eggs: This tofu dish is a bit similar - appearance and texture wise - to the one served at Chef's Gallery's (egg tofu). No complain with the taste, but the thousand year eggs - contained in bits and pieces in the tofu mix - does not really add weight or taste to the dish. It is quite light and enjoyable for an entree though.

Green Tea Noodle with Duck Meat: Again, texture and consistency of the noodle itself is nice. (Well, for the price, I expect it to be nice!), however the taste overall is quite bland.


We ordered their house specialty - Peking Duck. Since there were only the two of us, we ordered half of the duck, which costed around A$39. Luckily, the portion is generous, as the way they present it is similar to Hong Kong/ China - where the cuts actually include the skin and the meat (in some chinese restaurants, they only serve the skin to be eaten with the pancake roll, where the meat was taken away to be made into sang choy bow or noodle dish).
This dish came with duck soup, which was hearty and thick, and nice to have in winter. The duck is juicy and the skin is crispy with only a thin layer of fats underneath. With this set, they also provide the standard pancake rolls (nothing to shout about), thinly sliced cucumbers & spring onions, and their peking duck sauce.

It is a very nice dish, if you are not thinking about the bill that would come afterwards. 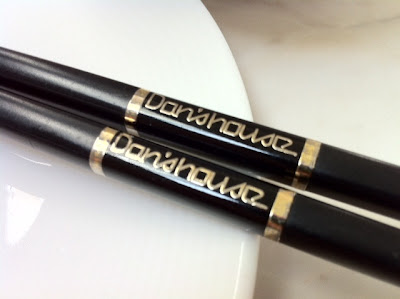 Email ThisBlogThis!Share to TwitterShare to FacebookShare to Pinterest
Labels: NomNom